In all my prayers for all of you, I always pray with joy because of your partnership in the gospel from the first day until now, being confident of this, that he who began a good work in you will carry it on to completion until the day of Christ Jesus.
Philippians 1:4-6

In January, two separate SHARE teams returned to Nakwakaal (Kachoda Zone) and Lokaliban (Lokori Zone) villages to follow-up on progress in the churches they planted back in December and to implement the Disciple-Making Movement training.

Together with the two Zones’ Motivators and Champions, the teams trained a total of 302 believers and started 7 cell-groups! A total of 33 people put their faith in Christ as Savior, and 22 of them were baptized!

On their way back to Lodwar, the team from Kachoda Zone stopped by Nakitoikakumon Village, where they screened The Jesus Film. A total of 61 attended and 14 put their faith in Christ as Savior!

Please pray for the following needs in these three villages:

– New believers to grow in their faith

– Distribution of Turkana language Audio Bibles for use in cell-groups

– Provision of water for domestic use

On the second day of teaching the DMM methodology in Nakwakaal Village, a young lady named Aruman Lopuya, who had joined James Ewoi’s group, gave a very painful and touching story of her life. She told us how she had gotten married to a “senseless” man who never bothered about her, even when she was pregnant. She gave birth to an overweight baby boy who did not cry at birth as normal babies do. Soon after the birth the baby developed a breathing problem. Aruman thought it was just ordinary mucus blocking his nostrils. The baby only breathed through his mouth. She took the baby to the nearby health center where the problem was diagnosed. She was referred to Eldoret Referral Hospital (nearly 350 miles away) for further treatment and management. The mother and baby stayed at the hospital for 2 weeks. The baby had a growth in his nostrils, but the doctors managed to remove it. Her experience in Eldoret was difficult, as she had never been to any big city before. She tried to call her husband for support, but he declined to talk to her. She had to call her father, who sold a camel to support her needs in Eldoret. By the grace of God, the child was healed, and they traveled back to Turkana.

In 2018, Aruman had her second baby boy. This baby developed health problems as well, including epilepsy. The baby couldn’t walk, crawl, or even hear. At one point, Aruman consulted a witchdoctor for help. The witchdoctor told her, that she had been bewitched by the many envious men who wanted to marry her. The remedy was to offer a goat to the witchdoctor to be slaughtered as appeasement to the gods. The condition of the baby still did not change. Aruman’s husband had since abandoned her because of her fate.

A friend advised Aruman to seek God’s intervention through prayers. She took the baby to the pastor in the village. They prayed. The child’s condition changed! After our teachings in the village, she urged us to go to her home and pray. We went and offered prayers. The Lord of mercy heard our prayers. The baby cried and attempted to walk! The baby’s ears were opened. He began to hear!

Monitor, David Koriang and David Ekaran helped the baby stand and walk (see photo). The family was marveled by the works of God. They are grateful to the Lord! 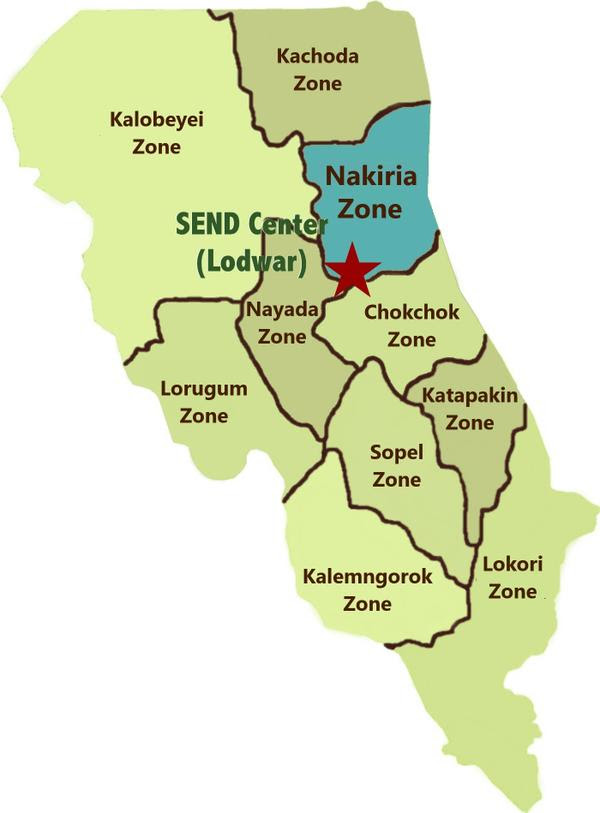 January 10-12th found the Nakiria Supervisor, Stanley Lokwawi, and Nakiria Coordinator, Peter Ille, travelling to Longech Village to train Monitors, Motivators, and Champions in the area the DMM methodology. The participants agreed to attend two additional weeks of training. They were each provided with a solar-powered Audio Bible at the end of the training and encouraged to go and share their faith with at least 5 non-believers.
The training team returned to the village on January 24th and 25th for follow up. In attendance were 6 Motivators and 12 Champions. Five of the Champions brought between 3 and 11 trainees from their Lighthouses. Four people were saved during the training.
The team, together with the Nakiria Zone’s Monitor, Motivators, and Champions, also engaged in construction of the new DMM Center for the Zone.
Nakiria Zone Coordinator, Peter Ille, training the Monitors and Motivators 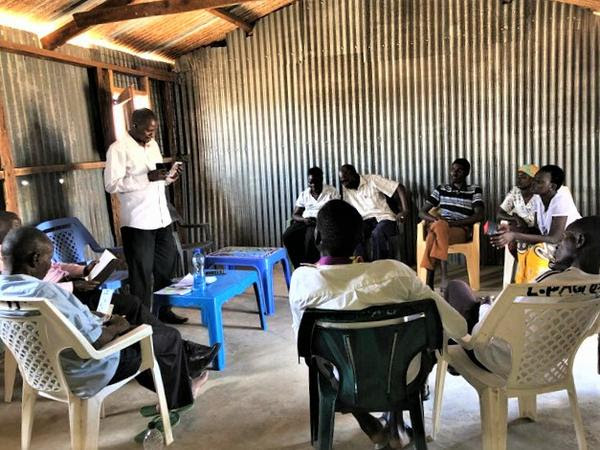 The student enrollment in our 30 Adult Literacy classes in Turkanaland reached 1,351 in January! And the teachers have determined to make the contextualized DMM training methodology an integral part of the regular curriculum. As a result, there are now 30 First Generation Disciple-Making Teachers, who have reproduced and are training the methodology to 100 Second Generation Cell-Groups in 8 of the 10 Zones. Absolutely amazing! 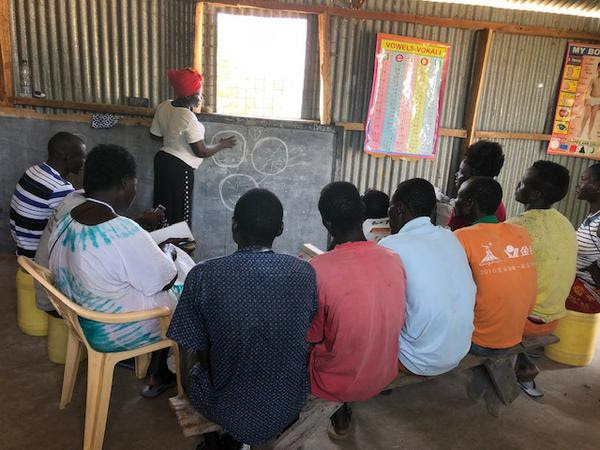 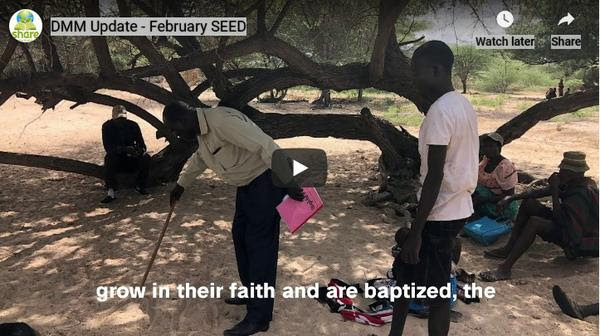 Some of SHARE’s Motivators in Kachoda Zone:

SHARE has now added monthly updates on each Motivator on our website through December 2019. To read information about what the Lord is doing through the Motivators, please visit  https://shareint.net/missionary-updates/ .
Each sponsor of a Motivator tremendously assists in spreading the Gospel throughout Turkanaland by providing prayer and financial support. We still have 26 Motivators in need of a sponsor. We invite you to consider sponsoring one of them at https://shareint.net/sponsor-a-missionary/ .

Our Coordinators and Motivators from all ten Zones, and the different media outlets in Turkana County, report of devastating invasion by locusts across Turkanaland this month. Residents have expressed fears that their livestock will die from lack of pasture unless the government controls the spread.

We call upon our brothers and sisters to pray for God’s intervention. Pray for discernment and wisdom as Share prepares to address this catastrophic natural calamity.

Jacob Ekuam, a village elder, stands next to a tree without leaves in Kanukurmeri Village

We thank you very much for your continued prayers and support. Together we are witnesses that the Lord fulfills His promise as we give back what He has entrusted to us for the sake of sharing the Good News with others. Yes, God used each one of us to “give.” He “poured into (our) lap…. a good measure, pressed down, shaken together and running over. For with the measure (we gave), it has been measured to (us)” (Luke 6:38).
The remaining financial need for 1Q of 2020 is $96,657. Your donation is greatly appreciated – always!
The SHARE Director – Sammy Murimi – is open to share more with your church or small group upon invitation at director@shareint.net; (318) 243-4243.

You may also mail your donation to: 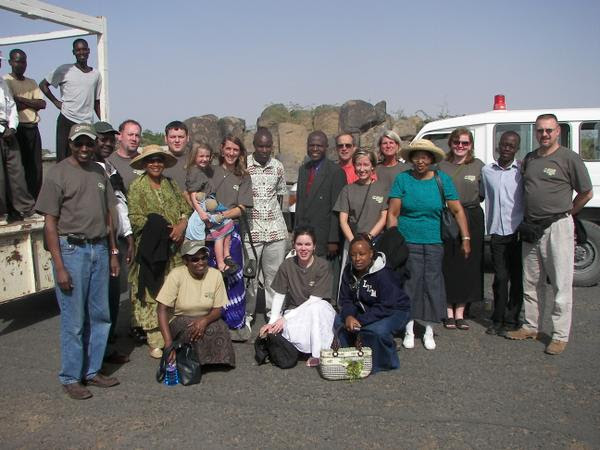 Recent Posts
CONNECT WITH US ON SOCIAL MEDIA